The breeding bird (and bee) season

I've asked my friend and neighbour Vicky to write a blog. Vicky is the RSPB's Corncrake and machair Project Officer on the island:


With summer becoming a distant memory and the onset of inclement weather I’d like to share a summary of the breeding bird season in and around the area I cover: 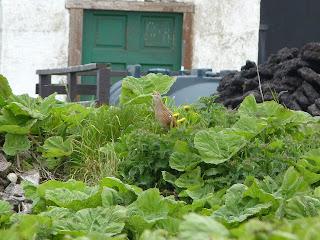 First up is some news about corncrake numbers. As you may be aware my life between the end of May and mid-July focuses on creeping around Lewis between midnight and 3am trying to pinpoint where all the male corncrakes are calling from. Fellow corncrake practitioners across Scotland do the same and between us we come up with a national total. Overall, it was a pretty poor season across the Scottish range, which is essentially the Scottish islands plus the last remaining mainland population in Durness, Caithness.  The total this year is 860, compared to 1016 in 2016. While the overall total is a significant decrease it is a varied picture.  Some areas have seen significant declines while others are down just a few birds.
On Lewis our official total was 75 compared to 103 in 2016 so we have lost quite a lot of birds (I think it is important to note that I am aware of about 10 other birds that I am certain we had, but I did not hear them on official survey nights, so I am unable to include them in the official figures).
My colleagues on Uist have had a slight decline recording 256 in 2017 compared to 268 in 2016. Colleagues on Coll have had a bad year with 49 birds compared to 89 in 20-16. The news from Ness is also particularly bleak: in 2016 we had 20 calling males but this year there were only 8 (plus 2 others that refused to call on survey nights).  To further confuse the picture other townships not too far from here maintained their numbers.
The national figure is the lowest since 2003. We are all feeling a bit glum about this news and there is much internal debate about the reason behind these declines.
Across Scotland crofters, farmers and conservationists have worked hard to maintain sufficient habitat for Corncrakes and this spring in particular when the birds arrived back there was plenty of good quality cover for nesting.  Some of us think that for the last couple of years the birds have had poor breeding seasons, possibly weather related, and have failed to recruit new birds into the population. Corncrakes are not very long lived birds and a couple of bad breeding seasons can have a significant knock-on effect in a very short time. However, this may be too simplistic. The problem with such a secretive bird is that it is very difficult to judge exactly what is going on in the season. 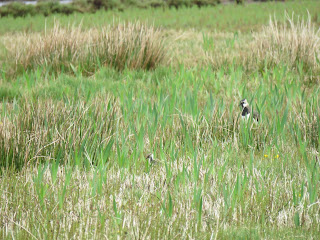 As I now live in Ness I am quite keen to keep a close eye on how many pairs of lapwing we have.  I monitor quite closely the breeding populations around Loch Stiapabhat and the surrounding machair.  This year the reserve supported 5 pairs and I am fairly certain 4 of these pairs managed to successfully fledge chicks.  This is a very impressive achievement considering the various threats they face (aerial attacks from Crows and Buzzards, not to mention predation by cats).   The nearby Fivepenny wet machair had three pairs and two of these pairs were successful.  This year I also kept a close eye on the wet area of the Habost machair which held eleven pairs this year.  In early June seven of these pairs still had chicks so it looked like a good season there too.  Finally, there is a small area of damp grassland near the lighthouse which this year supported two pairs of lapwing thatalso seemed to do well.  This year we also did a broad sweep of the wider Ness area for breeding waders and we picked up several additional lapwing hotspots.   This wider survey work has yet to be collated, so sometime over the winter I will try and update you on that.

Loch Stiapabhat
In addition to Lapwing the reserve also supports breeding Redshank and Snipe.     My early June survey picked up 18 pairs of Redshank and 8 pairs of Snipe.   I’m also delighted to report two male Corncrakes were calling from or very close to the reserve.  In addition this year Moorhen, Mallard and Gadwall successfully bred.   There were also a few pairs of Teal but I did not see any Teal broods.  That is not to say there weren’t any as there is plenty of tall vegetation to keep ducklings hidden. Sadly, once again this year the single Mute Swan failed to attract a mate so no cute swan cygnets this year! 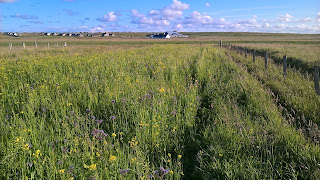 Finally a quick update for you on what is now an extremely rare bee found only on Scottish Islands and the far north Scottish mainland where there are extensive flower rich grasslands.  I had time this year to do some survey work around the Fivepenny machair.  Surveys were undertaken in June and July and Great yellow bumblebees were recorded on both surveys,   In June we noted several large queen bees as they emerged from hibernation and in July worker bees were also noted.   Further adhoc records were recorded from a croft in Fivepenny where some flower-rich and wildlife-friendly crops have been planted. 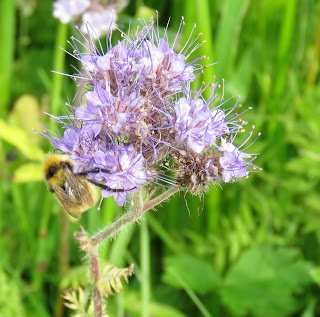 First of the year 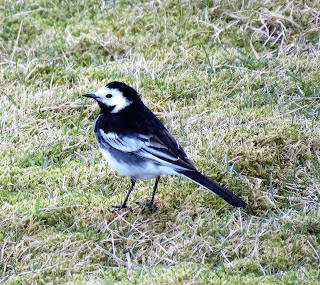 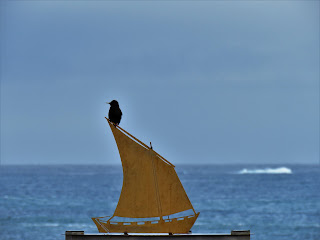 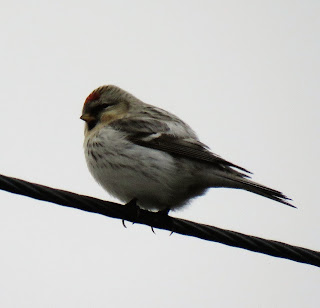 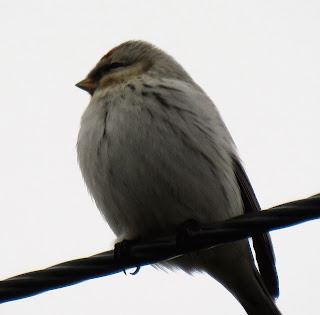 Large numbers of Oystercatchers feeding at the Lighthouse yesterday, 50+ 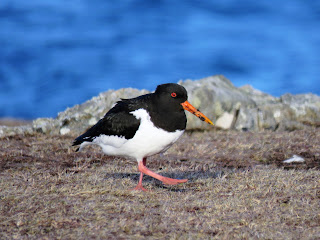 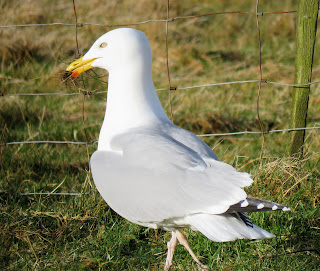 One of three Herring Gulls (above) on the croft this morning demonstrating grass-pulling behavior.
As per Nikolaas Tinbergen, ethologist and Nobel Prize winner: "... (this) occurs typically when two male birds meet on the boundary of their territories, as new birds are settling in. One or both of the birds may tear lumps of grass or moss from the ground with their bills. Grass-pulling Tinbergen concluded, was the result of a conflict between the desire to fight and the desire to flee. Each birds thwarted urges were 'displaced' into a new activity: Each in collecting nest material , it is true, but each is really doing to the grass what he would do to his opponent if he dared to get hold of it."
(New York Times, 7 April, 1974) 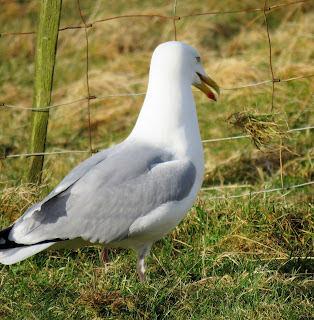 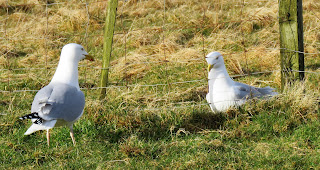 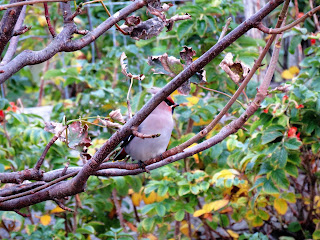 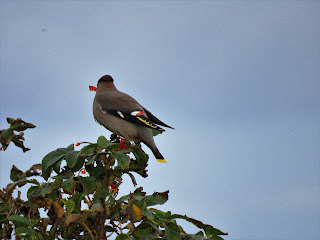 Two of a group of small flock of seven Waxwings, October 2016
Posted by Sam Elmer at 08:40 No comments: